On Twitter, Aster Glenn Gray shared some chalk art from her neighborhood, and chalk art is something I love and something I think is really restorative and heartening, so when I had to give up watching Self-Made (with the aforementioned Aster Glenn Gray--though remotely of course) due to Wakanomori's need to use the bandwidth for teaching, I went outside and drew a phoenix:

We'll rise from this.

I've been heartened by a number of encouraging posts from people on my friends list, but yesterday it was especially this one from

gaudior on how to handle a plague.

This entry was originally posted at https://asakiyume.dreamwidth.org/932641.html. Comments are welcome at either location.

The Gown of Harmonies is now live!

All money raised will go to THE FOOD BANK OF WESTERN MASSACHUSETTS, which serves the western Massachusetts counties of Berkshire, Franklin, Hampshire (my county), and Hampden (home of two cities with very high poverty rates: Springfield and Holyoke).

Many of you have probably read this story already, back when it came out in It Happened at the Ball, but if you know anyone who'd like a pleasant, novelette-length distraction of the balls-and-fairies sort, maybe consider sending it to them? You can know that your purchase will help people struggling in the current environment.

Here are the relevant links:

This entry was originally posted at https://asakiyume.dreamwidth.org/932560.html. Comments are welcome at either location.

"The Gown of Harmonies" was a story of mine that was included in Sherwood Smith's anthology It Happened at the Ball--various stories centering on or involving a ball. The exclusivity period is over, so I thought I'd offer it as as an ebook. (Actually, I had wanted to do a paperback too, but that turned out not to be possible, or at least not possible using the store of energy that I have available to pursue the matter.)

Here is the cover!

Any minute now... or anyway, in the next couple of days... it will be available across the digital universe! There will be dancing and music in the digital spheres!

(I'll let you know when it's truly available--just thought I'd share the fancy cover, which the ninja girl helped me with.)

This entry was originally posted at https://asakiyume.dreamwidth.org/932212.html. Comments are welcome at either location.

I heard this story on BBC World News, but the online links I could find with the best images were from this Business Insider story by Kate Taylor.

The founder of ABC Bakery in Ho Chi Minh city found that thousands of pounds of red dragon fruit were going unsold out in the Vietnamese countryside because Vietnam had closed its borders with China, the main buyer. So this bakery began buying the fruits and using them in their baked goods: 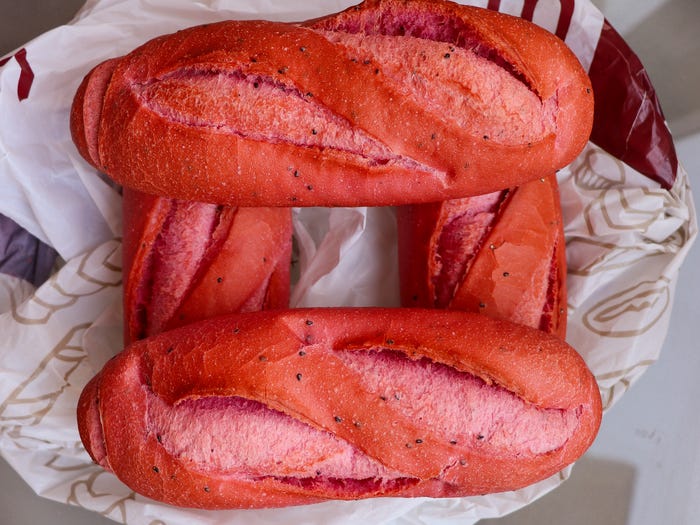 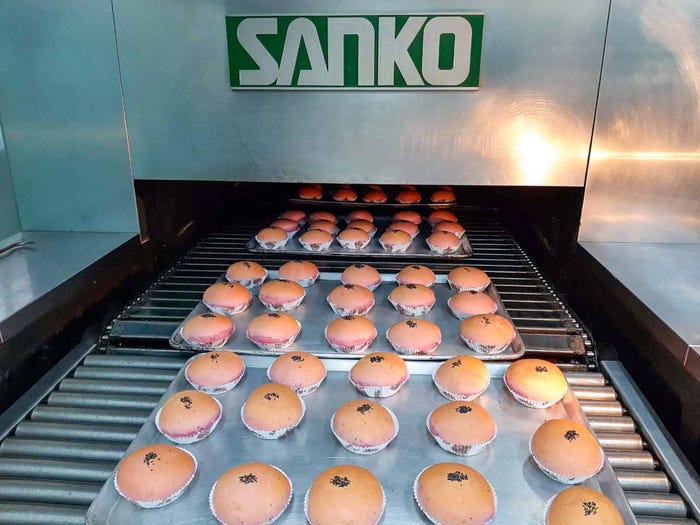 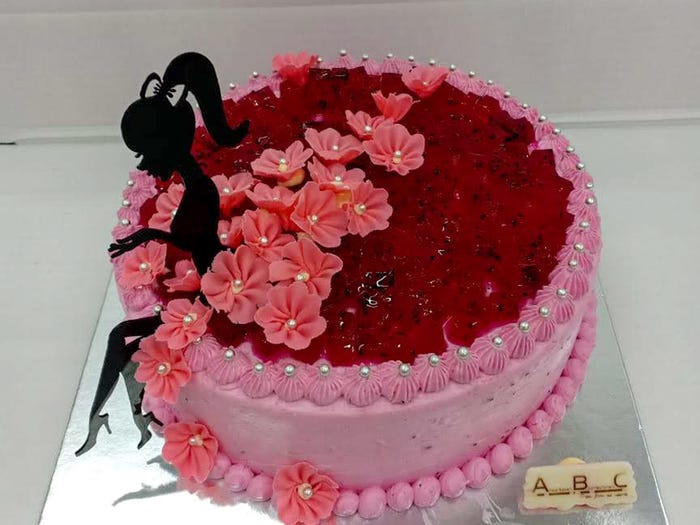 Here's what red dragon fruit looks like, so you have an idea of where the color comes from: 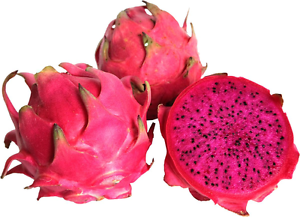 These offerings have been wildly popular, and it's really benefited the local farmers.

This entry was originally posted at https://asakiyume.dreamwidth.org/932053.html. Comments are welcome at either location. 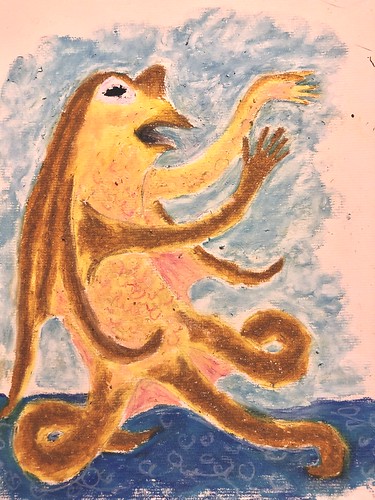 Also here are some flying amabie to bless your day.

This entry was originally posted at https://asakiyume.dreamwidth.org/931808.html. Comments are welcome at either location.

Wakanomori introduced me to the Japanese legend of the amabie. Here's what Wikipedia says about it:

Amabie (アマビエ) is a legendary Japanese mermaid or merman with 3 legs, who allegedly emerges from the sea and prophesies either an abundant harvest or an epidemic ... An amabie appeared in Higo Province (Kumamoto Prefecture) according to legend, around the middle of the fourth month, in the year Kōka-3 (mid-May, 1846) in the Edo era. A glowing object had been spotted in the sea, almost on a nightly basis. The town's official went to the coast to investigate, and witnessed the amabie. According to the sketch made by this official, it had long hair, a mouth like bird's bill, was covered in scales from the neck down, and three-legged. Addressing the official, it identified itself as an amabie and told him that it lived in the open sea. It went on to deliver a prophecy: "Good harvest will continue for six years from the current year; if disease spreads, show a picture of me to those who fall ill and they will be cured." Afterward, it returned to the sea. The story was printed in the kawaraban (woodblock-printed bulletins), where its portrait was printed, and this is how the story disseminated in Japan.

Here's what that first picture looked like (to me like something a kid would draw in their notebook): 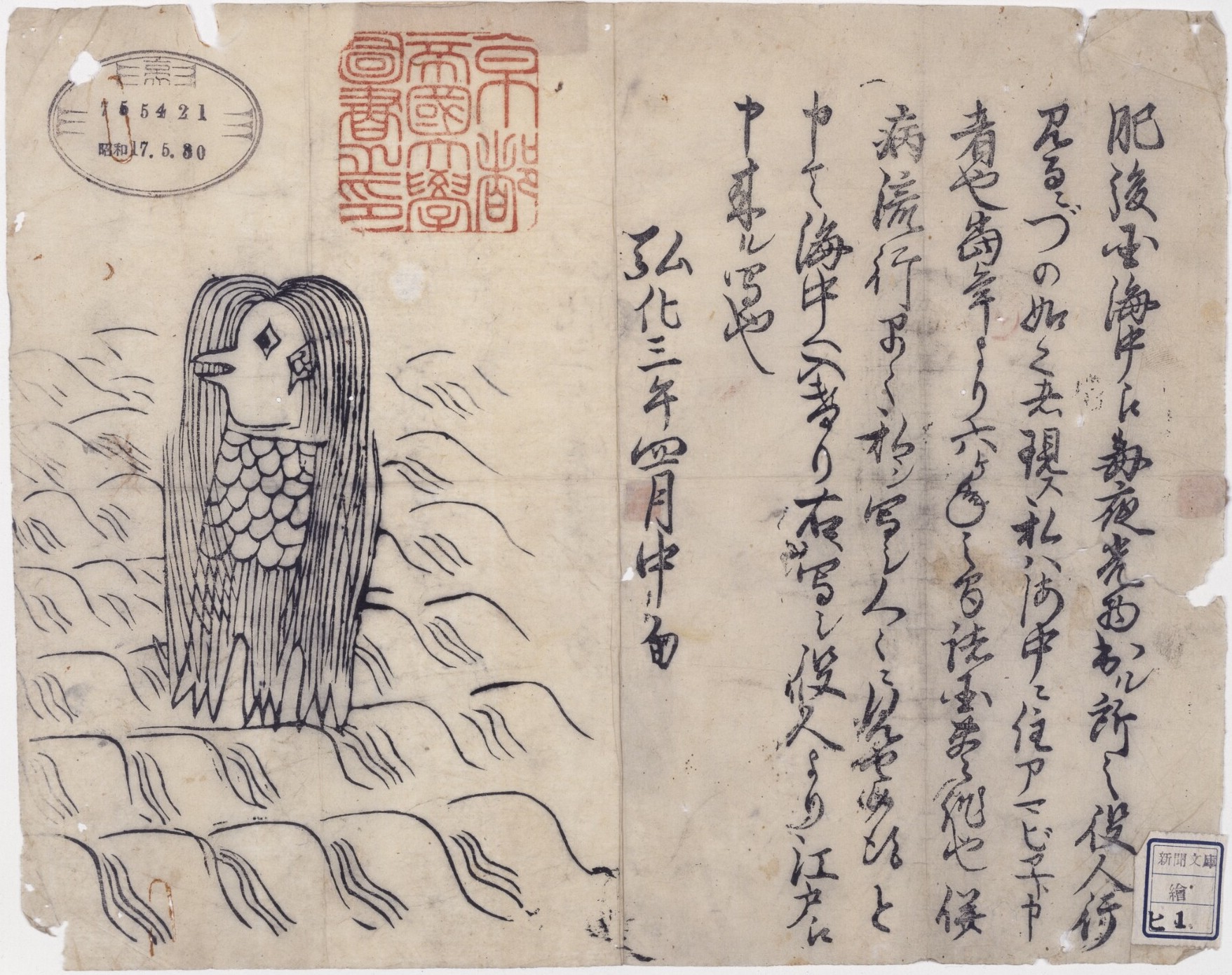 And there are a wealth of people sharing them these days on Twitter: 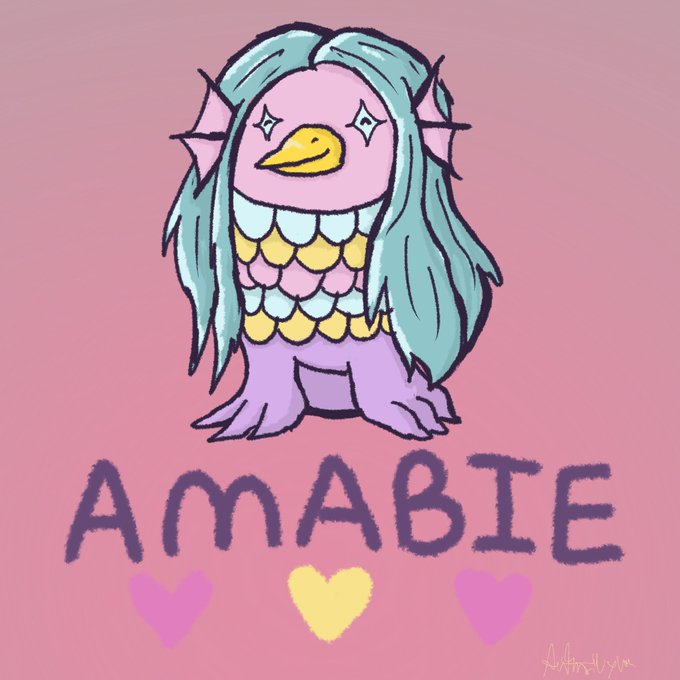 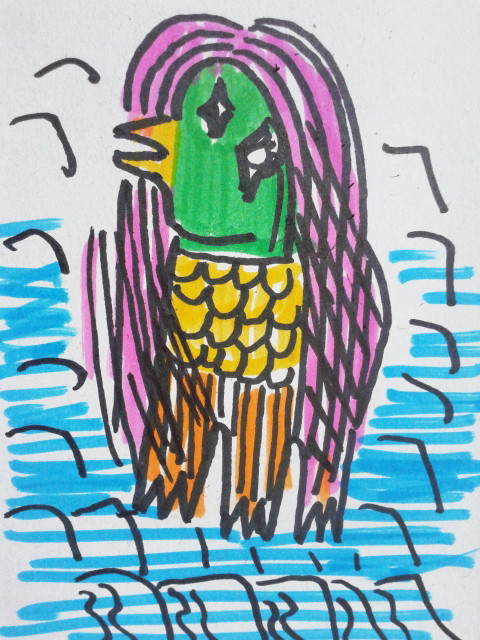 This entry was originally posted at https://asakiyume.dreamwidth.org/931581.html. Comments are welcome at either location.

One thing about all this, though--it's something shared by people around the world. You can watch the cute PSA video from the Vietnam (with English subtitles), or the TikTok dance to the same tune, or a Lagos, Nigeria, video to the same effect; you can share feelings and tips and news with people ... from all over. People encouraging or supporting one another, all on this one theme.

PS I should add that it was

green_knight who introduced me to the Vietnamese video.

This entry was originally posted at https://asakiyume.dreamwidth.org/931108.html. Comments are welcome at either location.

From a Twitter friend, this link. The singer introduces it:

There's a meme that's been floating around on Facebook lately that goes along the lines of, "The song, 'Jolene' but the singer never stops describing Jolene, going into more and more details and getting more and more disturbing until you're not sure what Jolene is except that you're afraid of her."

And so he and some friends created this!

Blackening the summer skies
with flaming wings and countless eyes
please take pity on us all, Jolene
Your smile is like a gaping maw
Your voice, it is a sirens call
I can't survive the sight of you, Jolene

They gibber madly in their sleep
And desperate hope is all I keep
From being like your worshippers, Jolene
For I could never understand
Your power beyond the ken of man
And I will never sleep again, Jolene

Your darkness rends and burns my skin,
Your soul is made of pitch and sin,
Your whole existence - pain to me, Jolene.
The universe’s screaming scars
Your shadow is the death of stars
Your birth was all our primal fears, Jolene

Your piercing howl, the bane of light
The wolves obey and bats take flight
Your servants now through longest night, Jolene
Cities perish in your wake
Your laughter makes the mountains quake
Your fury is the howling storm, Jolene

From abyssal depths you rise
Mocking mortals' wailing cries
In your bid to end all things. Jolene
Its easy for us all to see
How you'd devour all land and sea
Oh lord we beg you give us peace, Jolene

In ancient dark and shrouded halls
Your evil forms a cloying pall
The bindings failed, God save us from Jolene
Your screech depicts the sins of man
Our time of judgement just began
Our fate is in your awful hands, Jolene

This entry was originally posted at https://asakiyume.dreamwidth.org/930975.html. Comments are welcome at either location.

Recently finished: The Boy Who Was Mistaken for a Fairy King, a novella by H. L. Fullerton. You know the meme "Did . . . did a [X] write this?"? Well this story is best described by that meme: "Did . . . did a fairy write this?" Truly. Charming is charming but odd is also odd. Anyway, give it a try! I'd like to see what other people think.

Currently reading: Children of Ruin by Adrian Tchaikovsky. I loved Children of Time, and I'm enjoying this sequel just as much. In Children of Time you followed two storylines: a human storyline, with desperate survivors of an apocalypse traveling in a generation ship, looking for a place to settle, and a spider storyline, as spiders gradually evolve and become intelligent. Maybe I should say three storylines, because there's also the perspective of the human scientist, from the technological apex of Earth civilization, who's inadvertently responsible for spurring the spiders on their evolutionary journey.

It's hard to talk about Children of Ruin without giving spoilers for Children of Time, but what I can say is that this time, the non-human, Earth-origin creatures that enter the mix are octopuses, and Tchaikovsky does a **great** job of showing just how different their intelligence is--not centralized, like human or spider intelligence--and hugely performative. It's marvelous. There are also some actual aliens in this one who are--at least at the stage of the story I'm at--simultaneously extremely terrifying and yet endearing, too. How can you not feel something for creatures whose tagline is "We're going on an adventure," and mean it in all sincerity? And yet, at this stage of the story, each time you encounter that phrase, you feel cold dread.

Additionally, the humans and spiders from the last book are players in this one. Some plot elements and story structures are similar, but the story doesn't feel like a retreat, more like a very satisfying variation on a theme--so far.

This entry was originally posted at https://asakiyume.dreamwidth.org/930611.html. Comments are welcome at either location.

I was saying to

malorys_camera that a switch has flipped in my brain and now I'm tired of thinking about COVID 19. The other day I went several tens of minutes without thinking about it at all, and that was great! (Don't mistake me; I'm not saying that it's not serious--not saying that at all--I'm just saying that having my thoughts chained to it feels like being Alex in Clockwork Orange when he's got his eyes stuck open and is being force-fed Beethoven's Ninth. You could be exhausted by something as lovely as Beethoven's Ninth if the circumstances were right, and let's be real: COVID 19 is not that lovely.)

So for a change of scene, let me show you the Hardware of the Street which I discovered. I mean! Programming for a whole street! Admittedly a street in a housing development in western Massachusetts, so like, not the most crucial of streets. But just imagine what directives and protocols it might hold. What if roads communicated up to the things that pass along them? 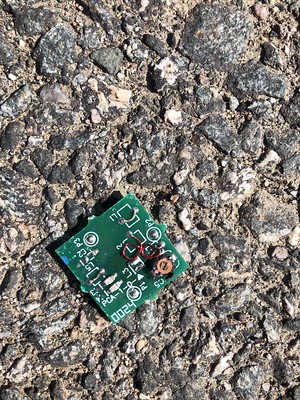 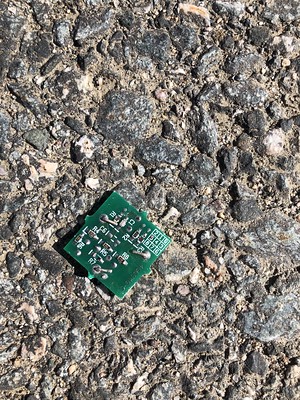 And speaking of, you'll enjoy a year's worth of animals passing over this natural bridge (condensed into five minutes--try watching just one! You'll be hooked), if you haven't already encountered it on your social media feeds. You'll be surprised at the variety of animals using it--fun to see the river in different states, as well.

This entry was originally posted at https://asakiyume.dreamwidth.org/930535.html. Comments are welcome at either location.
Collapse